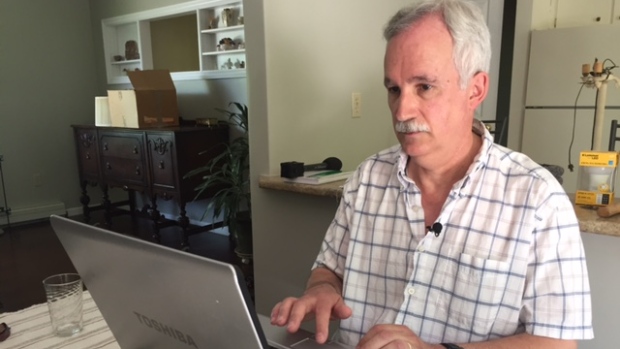 ‘I just want to tell people be aware that your email address may not be your own,’ said Steve Morshead

A Halifax man is facing the daunting task of going through almost two decades of email messages after his email provider served notice it was deactivating his account in 30 days because of his email address: noreply@eastlink.ca

“I had it since the late ’90s, probably 1998 when I really started getting online,” Steve Morshead told CBC News. “I asked for it, it was available and they gave it to me without hesitation.”

He said he picked the handle “noreply” because he wanted an unusual address — and back in the ’90s, it was.

Morshead never expected to lose his email address, which he uses for communicating with everyone from friends to banks to lawyers. He is in the process of selling his home and says this couldn’t come at a worse time.

“My email address is a personal identifier for banks, eBay, Kijiji, and hundreds of other places I’ve logged into — so many I can’t count,” Morshead said.

He said he wouldn’t be in this situation if Eastlink had addressed the issue when he applied for the email.

“Now, after all these years, 20 years almost, I find it reprehensible they want to pop out of bushes and just give me 30 days to go through 20 years worth of emails and decide what I want to keep,” he said.

Morshead said he was given 30 days notice on June 7 that he would lose access to his email address and all of his emails.

‘Does not fit our guidelines’

“We want to ensure that you have ample time to make other arrangements,” Sheri Ansems, Eastlink’s director of internal audit and corporate security, said in the letter to Morshead.

She said a regular review of the company’s security and email best business practices determined his email address “does not fit our guidelines and can be considered misleading.”

“The address may appear to others as an Eastlink business response address, and as such, individuals may inadvertently send information to this address that is intended for a different recipient,” Ansems wrote.

Morshead thinks Eastlink just realized he had the address after his wife wrote a letter to the company president. He wonders if there’s a flaw in Eastlink’s system since he occasionally gets bounced emails, which he deletes.

“They’re of no interest to me. They’re not addressed to me. It’s none of my business.  It’s not a communication I want to be involved in so I just delete them,” he said.

‘No empathy, no sympathy’

He said as a longtime customer, he finds Eastlink’s attitude surprising.

Morshead did ask the company to transfer the contents from the existing email account to a new one but they said no.

“Just flat no. No offers of help. Just the bullying that ‘We’re going to do it, you’re going to take it. That’s it.'”

The company believes that email may lead some to “believe that information coming from this address is from Eastlink.”

She said Eastlink has offered to work with Morshead “who has the ability to save or transfer his old emails. We have both explained how he can do so and that we would be happy to assist him through that process.”

Morshead has filed a formal complaint with the Commissioner for Complaints for Telecommunications Services (CCTS), an independent, non-profit organization established in 2007 by the CRTC to resolve complaints between customers and their home phone, wireless and internet providers.

According to a recent mid-year report, the CCTS received almost 4,000 complaints between August 2016 and January 2017. The report says almost 90 per cent of those complaints were resolved to the satisfaction of both the customer and service provider.

The CCTS can ask Eastlink to delay cancelling the email account, but Morshead said he’s been told that won’t happen in this case, leaving him struggling to deal with the situation as he tries to sell his house.

“I just want to tell people be aware that your email address may not be your own,” he said.