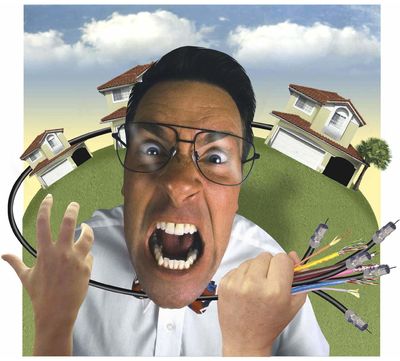 Ever been so mad at your cable- or satellite-TV provider that you caught yourself yelling at the television set?

Most likely, the outburst was driven by pure, pent-up small-screen frustration, coupled with the fact you didn’t know what or who else to shout at. Your family members had, no doubt, heard your complaints before, and it seemed pointless to scream into the canned-music-filled on-hold void that awaited if you decided to voice your displeasure to the provider’s customer-service line.

Well, shout aimlessly no more. Effective this week, the federal broadcast regulator has decreed that your complaints must be heard.

On Friday, the Television Service Provider Code came into effect, affording new levels of protection and a more effective dispute-resolution process to Canadians who are frequently fed up with the way cable and satellite TV is delivered in Canada. The code, established by the Canadian Radio-television and Telecommunications Commission (CRTC) in response to its long-running Let’s Talk TV public-consultation process, lays out several new initiatives aimed at ensuring consumers are given a somewhat fairer shake by purveyors of at-home screen entertainment.

The new code will be administered by the Commission for Complaints for Telecom-television Services (CCTS), an agency tasked with ensuring the new requirements are followed and handling complaints that consumers have been unable to resolve with TV-service providers.

Companies must provide their customers with a critical information summary, which includes a complete list of channels and/or packages they subscribe to, as well as a breakdown of monthly charges and contract-commitment period, and information on how to file complaints.

Cable, satellite and internet-protocol (IPTV) providers are also required to clearly explain the duration of any promotional offers and the regular price that will be enforced after the promotional period ends. Obligations placed on customers who accept promotional offers, such as minimum commitment periods, must also be explained.

Service calls, long a source of frustration for consumers, are also addressed in the new code. Companies must specify time frames and potential charges for home visits for installation or repairs. Also, customers must now be given 30 days’ notice in the event of changes to channel pricing, channel bundling or equipment-rental charges.

“Canadians will be more empowered in their relationships with television service providers,” CRTC chairperson and CEO Judith LaRocque said in a statement.

The CCTS has been active for many years, fielding complaints about telecommunication service (including phone and internet); with the launch of the new code, its focus expands to include TV-related issues, as well.

Interestingly, last year the CCTS received more complaints about television than any other service, despite the fact TV wasn’t part of its mandate. A large number of those complaints were related to the CRTC-enforced introduction of low-priced “skinny basic” cable-TV packages, which some consumers felt were encumbered by added fees and equipment-rental charges.

Those complaints, and anything else you’ve felt compelled to yell at your TV set about because there was nowhere else to turn, can now be directed to the CCTS by filling out an interactive questionnaire at ccts-cprst.ca.

It probably won’t allay every Canadian’s TV-watching frustrations, but it’s a start.